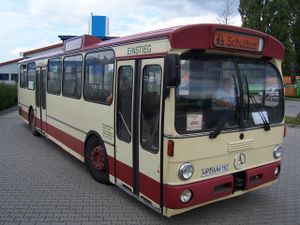 The O305 was basically built for single deckers (particularly for the State Transit Authority of New South Wales who purchased well over 1,300, and still operate over 600 rigid examples of all types). Double-deck examples, however, could be found in Hong Kong, Singapore and South Africa. 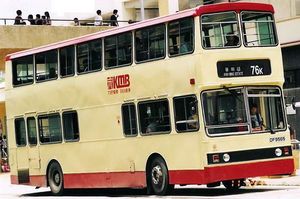 In Hong Kong, it is the first franchised bus model made outside United Kingdom and countries of Commonwealth of Nations. There were a total of 41 buses introduced, with the prototype in 1983 and the others in 1985. All of them were withdrawn and subsequently scrapped in 2001/2002 except three, which are preserved by groups of bus fans in Hong Kong.

For a long period of time, Hong Kong franchised bus operators were required by law to purchase buses produced in Commonwealth countries. After repealing the requirement in 1983, Mercedes-Benz supplied a two-axle 11-metre double-decker to Kowloon Motor Bus (KMB).

The O305 demonstrator was then registered as CZ6686 on 4 August 1983 and was allocated fleet number ME1. Following the successful trials of ME1, KMB ordered 40 buses (ME2-41) of the same kind in 1985, with improved frontal design and ventilation system. All the 41 buses were fitted with Alexander RH-type bodies.

KMB later adopted a policy of acquiring 3-axle double-deckers of similar length. Because Mercedes-Benz did not provide a 3-axle version of O305, no more Mercedes-Benz bus was purchased by KMB.

Initially, the first bus ran on route 105, which was new, running between Lai Chi Kok and Sheung Wan. However, Cross Harbour Tunnel's environment was unsuitable for this model, as well as the fact that the towing of these buses by the tow trucks used by the tunnel authority could result in damage to the chassis, so all the 41 buses were reallocated to express routes running between Yuen Long and Tsuen Wan/Kowloon. The buses were once renowned for its speed and power, with a maximum speed of 90km/h reported, and is widely rumoured to be the only bus in Hong Kong to be snapped by a speed camera.

The buses provided services on the trunk routes in Yuen Long until the mid-1990s. With newer buses (especially those with air conditioning) available for trunk services, the Benzes were redistributed to North District and Tai Po and served there until their retirement on 22 November 2002. Occasionally, Benzes still participate in some inter-district routes into Kowloon or Yuen Long, one of which becoming the last served by Benzes.

These buses had a unique livery designed by Kowloon Motor Bus, but all of them had the livery returned to the standard livery of KMB non-air-conditioned buses shortly before their re-distribution.

It was reported that bus enthusiasts rushed to take rides and photos of the last Benzes when they were announced to be retired, possibly due to their unique roles played in Hong Kong bus service history.

After the evaluation of 2 Mercedes-Benz O305 double-deckers acquired c. 1982, Singapore Bus Services acquired 200 Mercedes-Benz O305 double-deckers which were very similar with KMB's O305. It features an 11,412 cc OM407h engine with its modular W3D 080 R gearbox. With a licensed capacity of 109 passengers, the first of them entered service in 1984 and all of them retired in early 2000s. 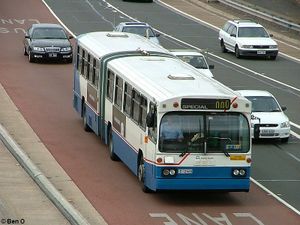 Sydney Buses acquired over 1300 O305s of different body styles (by the same body manufacturer - Pressed Metal Corporation, or PMC) between 1977 and 1987. 30 of these were the articulated O305G model.

Originally, the STA ordered 200 Mercedes-Benz O305s with PMC Galvastress (MkI) bodywork between 1977 and 1978. One of these was fitted with the Galvastress MkII body. This prototype was the forerunner for the MkII order of 550 Mercedes-Benz O305s. This was the largest bus order in Australia (and still the record hasn't been broken). The MkII body was internally different from the MkI body although the exterior remained very much the same with the edition of a more O305 style roof line, and larger rear windows. The MkII order was started in 1978 and completed in 1981. The reason for this large order was because of the takeover of AEC (most of the older fleet being AEC) left spare parts short, etc.

In mid-1981, the STA called for 100 single-deck vehicles and 30 articulated vehicles with the option of 80 more single-deck vehicles and the winner of this tender was Mercedes-Benz. The STA then took delivery of the 100+80 Mercedes-Benz O305s and 30 O305Gs. The body builder was PMC with its Galvastress MkIII body. The revisions to the body were minor, and the most noticeable was the dropping of the window line (Windows remained the same height and width, just dropped a few centimetres) to line up better with the rear windows and to free more space for the front and rear destination equipment. One of these was fitted with the prototype Galvastress MkIV body. The 30 O305Gs were delivered 1983-1984 (The prototype was delivered in 1981). The prototype originally had 3 doors, one at the front, one at the center and one at the rear and wasn't turbocharged (the other 29 were) until the prototype was brought up to standard with the other 29 by removing the rear door and turbocharging the engine (177 kW to 209 kW). 2 out of the batch had received ZF 5HP500 gearboxes and still have them.

The MkIV prototype went on to start the next order of O305s, 353 of them were delivered between 1984 and 1987. The chassis was slightly revised, and it was the first bus chassis the STA had operated with ABS. The Galvastress body was revised again with the addition of a square roof and fitted with square rear indicators, although the interior differed little from the MkIII. However, the bus was longer, with a length of 10.75 meters instead of 10.67 meters.

Although all of the MKIs and MKIIs, and an increasing number of the O305Gs and MKIIIs have been withdrawn, there are still over 600 O305's serving Sydney Buses. 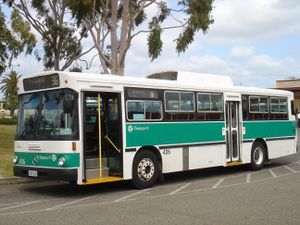 A Transperth O305 with O307 bodywork by JW Bolton, at Midland railway station in Perth (since withdrawn).

Perth was the first Australian city to operate the Mercedes-Benz O305. The first units entered service with the Metropolitan Transport Trust (MTT) in 1975. Over a period of eleven years between 1975 and 1986, over 400 O305's were purchased for the city. Transperth (the new name for the MTT starting in 1986) and its contractors began withdrawing this sizeable fleet of O305's in October 1999 following the start of delivery of some 350 Mercedes Benz O405NH low floor buses. The gradual withdrawal of these buses over the past nine years has made the O305 a very rare sight in the metropolitan corridor; the buses are seen a little more often in the eastern hills area. Transperth operates 8 O305's in regular service as of December 2008. Compared to the Sydney units, the Perth units feature different bodywork (manufactured by Freighter Industries, J. W. Bolton, Hillquip, or Howard Porter) and a higher final drive ratio (5.2:1). There have been some unusual O305's operating in Perth. Examples include No. 444, which features a Mauri (Italy) body assembled locally by J. W. Bolton (since removed from service as part of the fleet renewal program), and No. 007, an experimental bus (model OG305) with an LPG-fuelled engine (also since removed). In 1984, the MTT operated Australia's first CNG-fuelled bus - O305 No. 008. From the success of the trial gas buses, two O305s were converted to LPG operation in the early 1980s, a CNG-fuelled OG305 was ordered and entered service in 1987 (No. 009) and 26 O305s were converted to CNG in the early 1990s.

As the fleet upgrades, more and more CNG buses are retired from service, and few private operators have the capacity to install a CNG refill system. These buses face an uncertain future, but seem likely to follow buses No. 008 and No. 533 which were purchased to be immediately wrecked to provide replacement parts for existing diesels in the new owners fleet.

Perth was also the first Australian city to operate the Mercedes-Benz O305G. Three batches were purchased including 18 in 1979, 3 in 1980, and 19 in 1986-1987. The first and second batches had bodywork completed by J. W. Bolton and Howard Porter and featured model OM 407h 240 hp (177 kW) naturally aspirated engines. To overcome sluggishness, the buses in the third batch (also featuring Howard Porter bodies but built to the VöV-II design) were fitted with model OM 407hA 280 hp (206 kW) turbocharged engines. 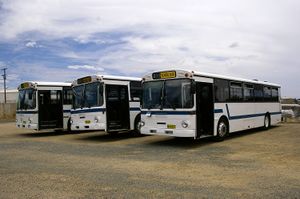 Ansair bodied Mercedes-Benz O305 buses which were owned by ACTION but currently owned by Fearnes Coaches.

Canberra also invested in a batch of Mercedes O305 citybuses with locally built Ansair (Melbourne) bodies. They were built with standard Mercedes O307 "STULB" fronts. A total of 85 of these units were delivered in 1984 and then tendered for disposal firstly in 1995 and then at several other intervals until 1999. Most units now operate with private bus companies in the Sydney metropolitan area as well as others scattered around the country. 12 were also exported to New Zealand to operate in Auckland and Wellington.

In addition to a large batch of MAN SG192 articulated vehicles purchased in the 1970s, 5 Mercedes O305G articulated vehicles were delivered in 1984. These vehicles were identical to the 85 Mercedes O305s and the additional of a concertina and tralier unit. Once again, these units were tendered for disposal in 1997/1998 and disposed of to various private bus companies around Australia.

The first buses to enter service on the O-Bahn were specially modified Mercedes-Benz O305 models. A fleet of 41 rigid and 51 articulated buses was purchased, their cost included in the original $98 million budget. The chassis were bought from Germany and heavily modified at the Mitsubishi Motors plant in Tonsley. The rigid buses had their power increased to 240 hp (177 kW) and the articulateds to 280 hp (207 kW); they were the first buses to travel at a speed of 100 km/h on suburban routes.