For a complete overview of all S-Class models see Mercedes-Benz S-Class.

The Mercedes-Benz W126 was a series of flagship vehicles manufactured by German automotive marque Mercedes-Benz. Premiering in September 1979 as the successor to the earlier W116 line, the W126 was the second generation of the Mercedes-Benz flagship to officially bear the S-Class name referring to Sonderklasse or "special class." The W126 was initially offered in straight-6, V8, and turbo diesel sedan models. In September 1981, 2-door coupé versions of the W126 were introduced. Compared to its predecessor, the W126 was more aerodynamic, fuel efficient, capacious, and powerfully engined. The W126 S-Class debuted a new Mercedes-Benz design style which was subsequently used on other vehicles in the company's lineup. The W126 line also introduced many Mercedes-Benz safety innovations, including the first airbag supplemental restraint systems, seatbelt pretensioners, and traction control.[1]

Following the debut of the 1970s generation W116 (which also included the flagship Mercedes-Benz 450SEL 6.9), Mercedes-Benz began plans for the next-generation S-Class model. Codenamed "project W126,"[1] the project had specific goals: an improved ride, better handling, and improved fuel efficiency.[2] These improvements were aimed at helping retain the S-Class' market leadership as the world's best-selling prestige luxury sedan.[1] Following the 1970s oil crisis, Mercedes-Benz had made fuel efficiency an especially pertinent goal (named "Energy Program"),[3] even in the large V8 engined versions of the S-Class.

In terms of the body design, the objective of the W126 design team, led by Mercedes-Benz's Bruno Sacco, was to produce a car that was sleeker and more aerodynamic (and thus lighter and faster) than the previous model. The application of lighter materials and alloys combined with thorough wind tunnel testing to reduce overall drag meant the car consumed about 10% less fuel than its predecessor.[2] The maximum speed was also increased (250 km/h in the most powerful model).[1]

After six years of development, the W126 was formally introduced at the Internationale Automobil-Ausstellung (International Motor Show, or IAA) in Frankfurt on September 1979. The initial lineup featured seven models in standard (SE, SD) and long (SEL, SDL) wheelbase sedan body styles: the 280 SE/SEL, 380 SE/SEL, 500 SE/SEL and 300 SD. Technically, the long wheelbase (SEL) variants were codenamed V126, but this was not popularly known.[1] In 1981, the coupé version (SEC) of the W126 S-Class premiered at the IAA with the 500 SEC model. In 1981, Wheels Magazine selected the W126 model 380 SE as its Car of the Year.[4]

Four years after the introduction of the fuel-efficiency "Energy Program," the model range had been reworked completely. In September 1985, again at the IAA in Frankfurt, the reworked model range was reintroduced. Apart from visual changes to the bumpers, side covers and alloys, the changes made to the available collection of engine variants was most visible. Two newly-constructed 6 cylinder engines and new 4.2 and 5.6 litre V8's were added, and other engines were further upgraded.

The W126 generation was replaced by the W140 in 1992, although a satellite factory in South Africa is known to have continued production until 1994.

The W126 S-Class premiered the next generation of Mercedes-Benz car styling, which came to dominate the lineup in the 1980s. Because the appearance differed from the rest of the Mercedes-Benz fleet at that time, some people did not appreciate the design at its debut.[3] Compared to its predecessor, the W116, the new model had a sleeker, lower profile look, with more aerodynamic qualities than before (drag coefficient of Cd 0.36 for the sedans, 0.34 for the coupés).[1] For the first time, a Mercedes-Benz sedan was not equipped with traditional chrome bumpers; polyurethane deformable bumpers were used, and visually aligned with body panels.[2]

The interior featured pleated leather on the doors, woodgrain trim on the center console and across the dash, and a simplified layout with symmetrically placed buttons. 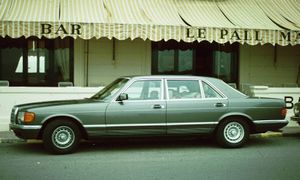 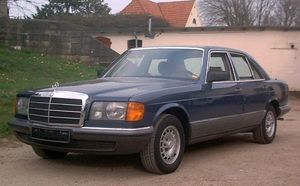 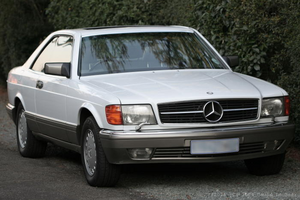 Novel luxury features/options included the following safety, comfort, and technological features. Whilst almost all of these features are available on modern luxury cars today, each in its own right was considered very significant in the 1980s. The harmonious and "matter-of-fact" way which these were combined, as well as their renowned durability, has added to the appeal of W126. 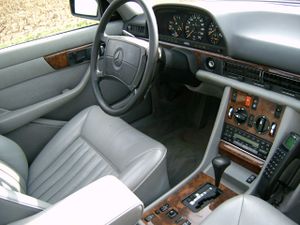 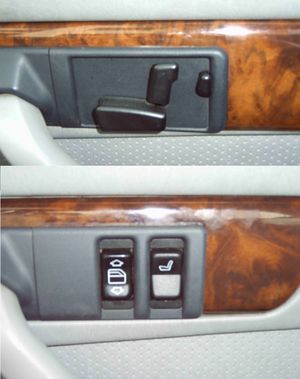 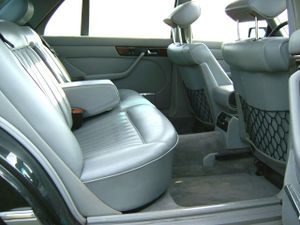 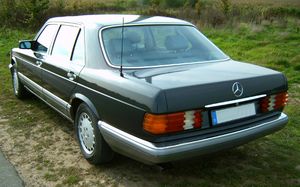 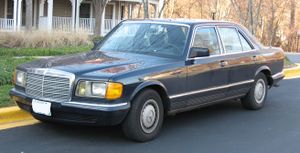 The 500 SEL has an interesting place in U.S. automotive history, since American demand for this particular car drove the establishment of a large grey market. The detuned, yet very expensive US specification 380 SE/SEL/SEC was underpowered, according to contemporary reports, and fuelled demand for the more powerful version available in the rest of the world. Approximately 22,000 units per year of grey market Mercedes-Benz (including the 500 SE/SEL) were sold in the early 1980s, according to contemporary reports in the Los Angeles Times.[6]

Some engines had a design defect[7] which causes ovaling of cylinder walls, bent rods, excessive oil consumption (1 quart per 200 miles or one litre per 300 kilometres is not uncommon), and eventually engine failure. Mercedes-Benz did not accept responsibility for this defect, even when problems arose before warranty terms were met. Most of these engine failures have so-far occurred on vehicles driven under high load or city driving, while highway driven engines do not show signs of problems until many miles later, if at all. Fixing the problem can cost the owner more than $10,000 or 8000€ which exceeds the value of the car. All 350 SD/SDL's will develop this issue, but will not reoccur after being repaired, therefore a thorough pre-purchase check by a qualified mechanic can give the potential buyer a better idea of what they are getting into. Some 350s have gone well over 400,000 miles (640,000 km), problem free.

Following the fuel crisis, part of the program was to reduce weight and increase power with decreased engine weight. On early versions of the 380, the engines came with a single row timing chain. These models were plagued with chain failure problems and some of the problems were corrected by Mercedes-Benz, free of charge. Some models, however, escaped retrofit and may at some point fail as a result. All models built in 1985 were equipped with the dual-row chain from the factory.

The reason for the susceptibility of a single row chain on this engine is because of the intricate rails and tensioner design, along with the two tall cam towers the chain must circulate around. Simple single cam engines generally do not have these problems when using a single belt. 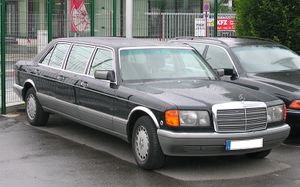 Like the current model S-Guard, specially modified W126 S-Class models were produced for the transport of diginitaries and world leaders. Among the modifications made included a wheelbase stretch, bulletproof glass, and armored body panels.

In September 1985, two newly-constructed 6 cylinder SOHC engines, M103 (already used in the new middle-class Mercedes-Benz W124 series), replaced the 2.8 litre DOHC M110 engines. The carburetted version was replaced by a 2.6 litre fuel injection engine, while the 3.0 litre version replaced the fuel injected M110. Also new was a 4.2 litre V8 engine, designed to replace the 3.8 litre version used in the W126 sedans, coupés, and the SL-Class. The 5 litre engine was modified to receive electronic ignition and electronic-mechanical fuel injection in form of the Bosch KE-jetronic system. Performance was increased to 245 hp (183 kW). An ECE version of the 5 litre M117 V8 engine was also available from September 1987 with a power output of 265 hp (198 kW)

The most spectacular new engine was the 5.6 litre V8 that was a further development from the 5 litre version. An increased stroke meant it could turn out a hefty 272 hp (203 kW). There was a higher compression version available, if required, that produced some 300 hp (220 kW). This version was only available without catalytic converter. But even without the catalytic converter this ECE version, as it was known, would meet the emission requirements of the European community.

A 3.0 litre inline 5 cylinder turbo diesel was offered from 1981-1985 in North America. They are known for covering many hundreds of thousands of miles with few problems. In 1986 the 300SD was replaced with the 300SDL. It was simply a stretched version of the 300SD, but the 5 cylinder engine was replaced with a new inline 6 cylinder which improved power and put some of the sluggishness of the previous diesel away. 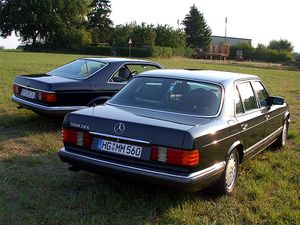 The W126 S-Class sedan and coupé

The W126 S-Class, the most successful production S-Class in history, has secured a place as one of the most well-remembered luxury vehicles–described by some as a "classic."[2] Its twelve-year production run was longer than any S-Class before or since, and following the debut of the W140 S-Class in 1991, the additional two years of production in South Africa was a testament to the W126's popularity in the export market. Although an expensive car to maintain, mostly due to the increased expense of Mercedes-Benz replacement parts, a late model W126, if properly driven, can still be a viable proposition today. Many W126s have been prominently featured in films long after production ended.[10]

This legacy stands in contrast with the W140 chassis which had very complex accessory systems, particularly the W140 HVAC system, electrical wiring (due to the push to manufacture environmentally friendly plastics), and auto-door closing features. Among actual owners, W126s are known for their simple maintenance, straightforward problems diagnosis, and long term reliability. It is one of the last Mercedes-Benz models that was still easily maintainable and repairable by owners. It was also featured in Grand Theft Auto Vice City Stories, renamed as the Admiral.