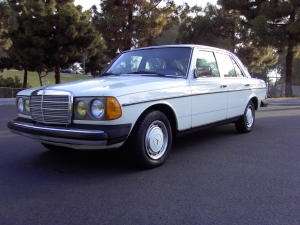 The Mercedes-Benz 240D was introduced in 1973 in Europe (1974 in North America) as a new diesel-powered variant of the W115 chassis, outranking the 220D as Mercedes' most powerful diesel car. Introduced in 1973 at a price of 19,913.40 Marks, the cost was four times the typical car of the time. It had many available luxuries, such as heated seats, cruise control, leather seats, and a manual or power-operated sunroof. It was at the time the fastest diesel engine available, though its 4-cylinder, 2.4 liter engine only produced 65 hp (48 kW). Along with a 3300 lb (1,500 kg) weight, performance today is considered extremely poor. Acceleration was negligible, and top speeds hardly exceeded 160 km/h (~100 mph).

In 1976, production of the W115 chassis ended and the 240D became part of the W123 chassis family along with a more powerful version, the 80-hp Mercedes-Benz 300D. Later beefed up to 88-hp. For the 240D, engine power was also beefed up to 53 kW (72 hp), which however still made it a very slow car. The 240D was last imported to North America in 1983 by MBUSA while production continued until 1985, but many cars remain on the road today 20 years later, a testament to the quality and durability of the original design and robust mechanicals.

Minor changes to the car's exterior design were introduced over the course of production.

Both the W115 and the W123 versions of the 240D are still considered some of Mercedes-Benz's most reliable models due to their low-tech, easy-maintenance design, relatively thick metal sheets and sturdy, robust parts. The engine's low power output compared to its volume is another contributing factor in the car's exceptional lifespan.

The 240D is renowned for often traveling several hundred thousand kilometers or more in its life. The record holder, a W115 240D acknowledged by Daimler-Benz and on display in their Stuttgart museum, clocked 4.6 million kilometers between 1976 to 2004, mostly working as a taxi based in Thessaloniki. During this time the owner, Gregorios Sachinidis, was able to call upon the original engine and two spare units, deploying them on a rotational basis 11 times in total. [1] Mercedes made badges available for their cars to mark each 250,000 kilometers the car had traveled. 240Ds are often seen in West Africa as taxis and bush taxis covering hundreds of kilometres daily. In some parts of northwestern Africa, notably Mauritania and Morocco, they make up over half the cars on the road.