From Mercedes Wiki
Jump to navigation Jump to search
This article is about the car produced from 1952 to 1963. For other cars with the same name, see Mercedes-Benz SL-Class.

The Mercedes-Benz 300SL was introduced in 1954 as a two-seat, closed sports car with characteristic gull-wing doors. Later it was offered as an open roadster.

Built by Daimler-Benz AG and internally numbered W198, the fuel-injected road version was based (somewhat loosely) on the company's highly successful competition-only sports car of 1952, the Mercedes-Benz 300SL (W194) which had less power, as it still had carburetors.

The road model was suggested by Max Hoffman. Because it was intended for customers whose preferences were reported to Hoffman by dealers he supplied in the booming, post-war American market, it was introduced at the 1954 New York Auto Show—unlike previous models introduced at either the Frankfurt or Geneva shows. The 300SL was best known for both its distinctive gull wing or butterfly wing doors and for being the first-ever gasoline-powered car equipped with fuel injection directly into the combustion chamber. The gull wing version was available from March 1955 to 1957. In Mercedes-Benz fashion, the "300" referred to the engine's cylinder displacement, in this case, three liters. The "SL", as applied to a roadster, stood for "Sport Leicht" or "Sport Light."

More widely produced (25,881 units) and starting in 1954 was the similar-looking 190SL with a 105 hp (78 kW) 4cyl engine, available only as roadster (or with an additional hardtop, as Coupe Roadster). The 190SL, based on a shortened 180 saloon floorpan, was equivalent to today's SLK in its market positioning when compared to the SL.[2] Production for both the 190SL and 300SL ended in 1963 when the 230SL was introduced.

A race car for the street

The gull wing doors, hinged at the roof and so named because the open doors resembled a bird's outstretched wings, were implemented as such to accommodate for the car's tubular chassis, designed by DBAG's chief developing engineer, Rudolf Uhlenhaut. Part of the chassis passed through what would be the lower half of a standard door. 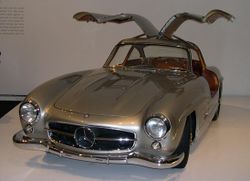 This tubular chassis was a necessity, as the original car was designed solely for racing and needed to be as light as possible due to the rather underpowered original, carbureted, engine, while still providing a high level of strength. This required the driver and any passengers to do some gymnastics to get in or out of the car, usually by sitting on and sliding across the wide door sill. A steering wheel with a tilt-away column made the process considerably easier became known as the "fat man's steering wheel".

It was Max Hoffman, Daimler-Benz's official importer in the USA, who convinced DBAG management in Stuttgart that a street version of the 300SL would be a commercial success, especially in the US. Hoffman's prediction was correct since more than 80% of the vehicle's total production of approximately 1400 units were sold in the US, making the Gull wing the first Mercedes-Benz which sold in bulk outside its home market. The 300SL is credited for changing the company's image in America from a manufacturer of solid, but staid, automobiles to that of a producer of sporty cars.

The body was mainly steel, except for the aluminum hood, doors and trunk lid. The 300SL could also be ordered with an all-aluminium outer skin, saving 80 kg (176 lb), but at tremendous added cost. 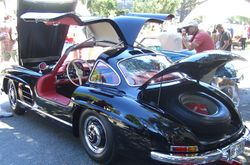 The engine, canted at a fifty-degree angle to the left to allow for a lower hoodline, was the same 3.0 litre straight-6 as the regular four-door 300 but with a Bosch mechanical direct fuel injection system that almost doubled its original power of 86 kW (115 hp) in the original carbureted trim. This new injection system was a first in any gasoline-powered car - apart from the rather small Gutbrod where the Mercedes engineers, who had developed the principle for the DB 601 fighter aircraft engine, had to work after the war. It allowed a top speed of up to 260 km/h (161 mph) depending on gear ratio (several options were available) and drag (bumpers were optional, and race tyres fitted for tests), making the 300SL the fastest production car of its time. The maintenance requirements were high, unlike the current electrically powered fuel injection systems, the mechanical fuel pump would continue to inject gasoline into the engine during the interval between shutting off the ignition and the engine's coming to a stop; this gasoline was of course not burned, and washed the oil from the cylinder walls and ended up diluting the engine's lubricating oil, particularly if the engine was not driven hard enough nor long enough to reach a temperature high enough to evaporate it out of the oil. 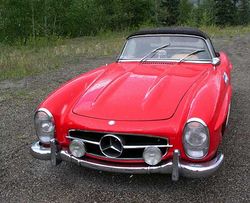 Exacerbating the problem were the large oil cooler as well as the large volume of oil (10 liters), both oriented more to racing than to street driving, which virtually guaranteed that the oil would not reach a high enough temperature. In practice, many street drivers would block off airflow through the oil cooler, and the recommended oil change interval was 1,000 miles (1,600 km). Operation of the clutch was very heavy, many drivers would have a sore lower back the next day. The later roadster had an improved clutch arm helper spring which reduced the pedal force and, from March of 1963, a light alloy crankcase (209 built) [3].

Aerodynamics played an important role in the car's speed. Mercedes-Benz engineers even went so far as to place horizontal "eyebrows" over the wheel openings. Given the car's overall styling, it has been suggested that the eyebrows were added to make the car more appealing to American buyers rather than to serve any functional purpose since American cars of the period were rather flamboyant by comparison to the 300SL. Unlike many cars of the 1950s, the steering was relatively precise and the four-wheel independent suspension allowed for a reasonably comfortable ride and markedly better overall handling. However, the rear swing axle, jointed only at the differential, not at the wheels themselves, could be treacherous at high speeds or on imperfect roads due to extreme changes in camber. 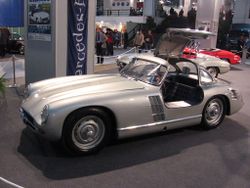 In 1952, the original 300SL (model Mercedes-Benz W194) [5] scored overall wins at the 24 Hours of Le Mans, in Berne-Bremgarten, in the sportscar race of the Eifelrennen at the Nürburgring, and in Mexico's Carrera Panamericana. It also managed second and fourth places at its first outing, the Mille Miglia in 1952.

These successes, especially those on the high speed open road races, were rather surprising as the engine then was fitted only with carburetors, producing 175 hp (130 kW), which was not only less than the competing cars by Ferrari and Jaguar, but also less than the road car of 1954. Low weight and low aerodynamic drag made the 300SL fast enough to be competitive in endurance races.

In 2005, a 300SL coupe driven by 87 year old John Fitch, who had been a Mercedes-Benz factory racing driver in 1955, attempted to set a new land speed record for the F/GT class at Bonneville Speedway, but was thwarted by a balky fuel pump that limited top speed to 150 mph (240 km/h). After the run, the team vowed to return for a second attempt the next year. Fitch noted that he had driven these cars faster than that at night, in the rain, on the road with 60 other cars. The attempt is documented in the film Gull wing at Twilight: The Bonneville Ride of John Fitch, which was aired on PBS [6].

Today, the 300SL with its unique doors, technological firsts, and low production numbers is considered one of the most collectible Mercedes-Benz models of all time, with prices reaching well past the US$400,000 mark. In addition, Sports Car International magazine ranked the 300SL as the number 5 sports car of all time.

The Mercedes-Benz SLR McLaren is inspired by these 1950s automobiles.