The Mercedes-Benz CLK GTR is a grand tourer and race car that was built by Mercedes-AMG, performance and motorsports arm of Mercedes-Benz. Intended for racing in the new FIA GT Championship series in 1997, the CLK GTR was designed primarily as a race car, with the road cars necessary in order to meet homologation standards being secondary in the car's design. Thus the limited production road going cars were considered racing cars for the road.

After competing successfully in 1997, the race car was upgraded in 1998 for the 24 Hours of Le Mans and renamed the CLK LM. Following the construction of the CLK LMs and the CLK GTR road cars, the project would end in 1999 by being replaced by the Mercedes-Benz CLR Le Mans prototype. 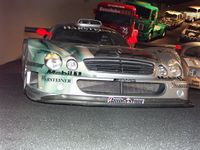 A CLK GTR on display in the Mercedes-Benz Museum.

As the Deutsche Tourenwagen Meisterschaft/ITC had folded in late 1996, with both remaining competitors Opel and Alfa Romeo leaving due to the high costs of their 4WD designs, Mercedes-Benz had no top series to compete in. With the success of the BPR Global GT Series leading to the FIA taking over and turning it into an international series known as the FIA GT Championship, Mercedes-Benz saw an opportunity to go against manufacturers like Porsche and Ferrari.

Following the design that Porsche had laid out with their 911 homologation special, Mercedes-AMG was tasked by Mercedes-Benz with creating an extreme racing car that still maintained some elements of a normal street legal car. AMG's designers created a car which shared some design elements with the Mercedes-Benz CLK, yet had all the standard features of a racing car underneath. A Mercedes-Benz M120 V12 engine would be at the heart of the car, mounted behind the cockpit. The bodywork would be made entirely of carbon fiber, and would feature many aerodynamic design elements and cooling openings in order to survive on the race track.

Upon completion of the first two prototypes a mere 128 days after the initial drawings had been made, the CLK GTRs were entered into the 1997 FIA GT Championship season, debuting at the season-opener at one of Mercedes-Benz's home tracks, the Hockenheimring. Unfortunately the new cars were not able to shine, as brake problems eliminated one car after five laps, and the other finished over 20 laps behind the winning McLaren. However by the next round at Silverstone, the CLK GTR began to show its pace, finishing less than a second behind the winning McLaren. By the fourth round, returning to Germany for the Nürburgring, a third CLK GTR was added to the team. In this race, Mercedes-Benz successfully outperformed the fleet of McLarens, taking first and second places. The team would finish out the season with five more wins, at A1-Ring, Suzuka, Donington, Sebring, and Laguna Seca, allowing them to secure the team championship as well as the drivers championship for Bernd Schneider.

Mercedes-Benz would use the CLK GTR for the first two rounds of the 1998 season before upgrading to the CLK LM. However privateer team Persson Motorsport would campaign two CLK GTRs throughout the entire season, taking a best finish of second at Oschersleben before finishing the year third in the teams championship.

Initially the CLK-GTR's V12 engine produced approximately 600 hp (450 kW) before developments during the 1997 season increased this to 630 hp (470 kW). Persson Motorsport's CLK GTRs remained at this power output as Mercedes-AMG had moved to development of the V8 in the CLK LM.

After conquering the FIA GT Championship, Mercedes-Benz set its sights on competing at the 24 Hours of Le Mans in 1998, which it had not been at since 1991. However, Le Mans presented a different challenge from that offered in FIA GT, in that the race distances were nearly one tenth the distance covered at Le Mans. Therefore Mercedes-AMG set about altering the CLK GTR in order to meet the new demands required at Le Mans.

First and foremost, Mercedes-AMG decided that the M120 V12 would not be up to the task of running for 24 hours. It was decided instead that Mercedes would actually return to an engine they had used in Group C in the late 1980s, the M119 V8. Abandoning the turbochargers that the M119 had used in Group C and enlarging the displacement, Mercedes-AMG felt that the M119 would have better reliability at speeds while still performing the same amount of power as the M120 due to air restrictor regulations.

Satisfied with the engine, Mercedes-AMG also set about altering the bodywork to better cope with the high speeds of Le Mans. The nose was lowered, with the large front brake cooling ducts on the sides of the nose being removed and replaced by a single, large opening in the front of the car. The roof of the car was also lowered and a new engine air intake designed. Various other mechanical tweaks were also performed. This new car would become known as CLK LM, standing for Le Mans.

Debuting at Le Mans, the CLK LMs were immediately quick. The two car team took the pole, ahead of custom built open cockpit Le Mans prototypes. However, Mercedes-AMG's belief that the M119 V8s would be better suited to Le Mans was proven wrong as both cars suffered engine failures within the first few hours of the race, leaving Mercedes-Benz dejected.

For the 1999 season, no competitor attempted to enter the GT1 class in FIA GT except for Mercedes-Benz, forcing the FIA to cancel the class, similar to the DTM/ITC two years early. Mercedes-Benz thus turned to constructing an all-new car to overcome their failure at Le Mans. No longer forced to build a racing car that could also be a road car, Mercedes-AMG set about creating the Mercedes-Benz CLR.

Even though the FIA GT1 class was cancelled for 1999, Mercedes was obliged to finally deliver the required 25 road cars they had promised. An initial road car was built in 1997 in order to meet initial FIA requirements, but this car was retained by Mercedes. For the other 25 road cars, each was built by AMG at the Affalterbach factory between winter of 1998 and summer of 1999 and differed only slightly from the race car. All of the 25 CLK GTRs ever built were left hand drive except for one which was specially built for Sultan Hassanal Bolkiah of Brunei. Driver comfort and refinements were at a minimum in the construction of the road cars as Mercedes-Benz wished to not only offer customers a true race car, but also to attempt to keep the price low. Leather was used in the interior and an air conditioning system was offered. Two small storage lockers were also built underneath each upward swinging door. Traction control was also added for driver safety.

The car retained much of the design of the original CLK GTR instead of the CLK LM, including the V12 and many stylistic elements. One key difference was the rear wing, which used a hoop-style integrated wing in place of the separate racing wing. From the otherwise unrelated standard production Mercedes-Benz CLK, only the instrumentation, front grille and the four headlamps were used.

Ilmor Engineering provided enhancements to the engine, increasing displacement from 5.9 liters to 6.8. This increase in displacement coupled with the removal of a racing air restrictor allowed for 720 bhp (537 kW) and torque to 572 lb·ft (776 N·m). Mercedes-AMG claimed a 0-60 mph acceleration time of 3.4 seconds and a top speed of 200 mph (322 km/h).

The Guinness Book of World Records recorded the CLK GTR as the most expensive production car ever built at the time, with a price of $1,547,620(USD). 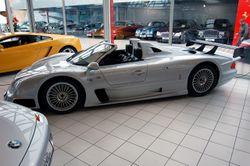 After the completion of the 25 original CLK GTRs, AMG's specialist group H.W.A., who had assisted in the construction of the CLK GTRs, began construction of a roadster version of the CLK GTR. Built either by modifying an existing CLK GTR or by building a new car from spare chassis and parts, these cars were modified with the removal of their roofs as well as a reconstruction of their engine covers. Also the rearwing got replaced by a separate black wing, close to the one on the race CLK-GTR. Further the Roadster can be recognized by its different grill, which had a large Star in it instead of a small version above it. Two rollbars integrating the cockpit headrests were used not only for structural integrity, but also rollover protection. A total of five CLK GTR Roadsters were built by the company.

H.W.A. also constructed a second variant, known as the CLK GTR Super Sport. These cars were similar to CLK GTRs, yet were powered instead by the newer Mercedes-AMG 7.3L V12 which had been in use in the Pagani Zonda and Mercedes-Benz SL73 AMG. The car also gained an additional front splitter for better stability at high speeds. Only five were built being badged as a the SuperSport.