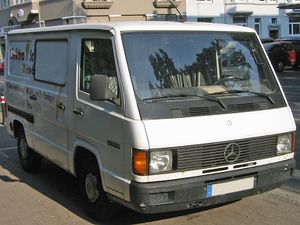 The Mercedes-Benz MB100 is a small panel truck (van) made by Mercedes-Benz in three different versions: a cargo van, a passenger van (“bus”) with more windows, and a camper-van.

The vehicle was powered by a 2.4 litre diesel making about 55 kW (73 hp), an engine also used in the Mercedes Benz 207D. Production began in 1981, at the Vitoria factory in northern Spain. In 1992 the MB100 was given a slanted radiator and an extended front end, intended among other things to enhance safety in a collision.

In Germany the MB100 was offered from 1988 to 1995 as an extension of Daimler-Benz's commercial motor vehicle range. The MB100 was eventually replaced by the Mercedes-Benz Vito.