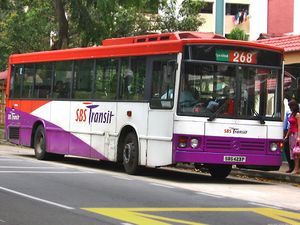 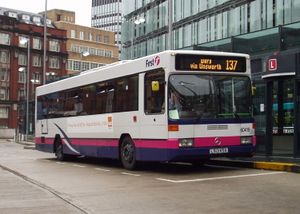 A right-hand drive O405, bodied by Wrightbus, in Manchester, UK.

The step-entrance version was known as the O405. An articulated version of O405 was also built, which was known as O405G.

There were two generations of O405 chassis, designated O405 MkI and O405 MkII.

The O405 MkI was marketed between mid-1980s and early 1990s. It featured a Mercedes Benz OM447h naturally aspirated engine with outputs of either 157 kW (210 hp) or 184 kW (250 hp). Optionally available was a naturally aspirated compressed natural gas engine model M447hG with 150 kW (205 hp) output. The gearbox coupled to the engine was usually the Mercedes Benz W3E110/2.2R or Mercedes-Benz W3E112/2.2R (the former being able to handle the more powerful 184 kW engine), although there have been other gearboxes such as the ZF 5HP 500 or Allison B300R coupled to the engine.

The low-floor version of the O405 was known as the O405N (or O405GN for articulated version), later a further developed version was also built, it was known as the O405N²/O405N2 (or O405GN²/O405GN2 for articulated version). The O405(G)N do not have steps at the entrances and exits, but the seats are mounted on "platforms". The GN2 type addresses this problem. These buses are usually fitted with ZF transmissions, but some are fitted with Voith examples.

This section of a bus-related article requires expansion. You can help Wikipedia by expanding it. 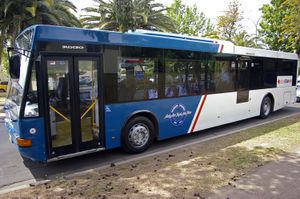 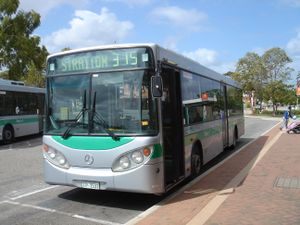 The low-entry version O405NH was produced by EvoBus for the Australia market. Much of its popularity with government and private operators alike can be attributed to the popularity of the Mercedes-Benz O405 MkII chassis that it replaced.

The chassis was derived from a combination of the rear modules of an O405 MkII chassis and the front modules of an O405N²/O405N^2 chassis. Because of the difference in height between the front and rear modules of the chassis, there are one or more steps leading up from behind the centre door position to a standard O405 floorline. Because the chassis has a horizonally-mounted engine, there's no room for a rear door. This "low-entry" concept has become very popular in Europe - many integral products using this concept have been released such as the Mercedes-Benz Citaro LE.

Sydney Buses and Transperth of Australia have both purchased large numbers of buses built on the O405NH chassis. Between 1999 and 2002, the New South Wales government placed 300 compressed natural gas O405NHs onto Sydney's roads. These featured the M447hG 175 kW (238 hp) Euro II engine with a Custom Coaches "Citaro" body. The Transperth order originally consisted of 848 units with bodies built by Volgren. Initial deliveries consisted of diesel units featuring the OM447hLA 184 kW (250 hp) engine with the first compressed natural gas unit appearing in 2001 featuring the same engine as the Sydney Buses examples. A total of 397 O405NHs were delivered to the Transperth network before the chassis was discontinued, consisting of 48 natural gas and 349 diesel units.

The O405NH chassis has won Australian Bus of the Year twice.