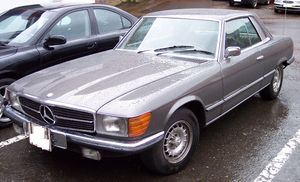 The Mercedes-Benz C107 coupe was built from 1973 to 1981 and was always badged as the 'SLC.' It was an elongated version of the R107, most commonly known as the '450SL.' It was also Mercedes-Benz's most expensive and top-of-the-line offering in the years it was produced, barring the custom order W100 600 series.

Like R107, under the skin the SLC was virtually a W114 with a larger engine, and styling cues from the contemporary S-Class. This approach to developing low volume models, while not particularly interesting, proved far more profitable that the clean sheet design approach of certain contemporaries, like the Citroën SM.

The SLC succeeded the saloon-based SE coupes and convertibles of the 1960's. The SL's wheelbase was stretched and the car received a fixed roof. Some feel the SLC suffered in terms of styling, being only a very large luxury coupe built as derivative of an SL and not of S class. Most criticism was directed towards the louvers in front of the C-pillars which, no doubt, were added to mask the fact that the full size windows could not retract completely. In the US, the SLC was further burdened with very large bumpers, far out of proportion to the design.

The 1981 successor to the SLC has been inspired by SLC (front section) but an entirely different type of car - a large 2 door sedan with a more cohesive design. ' The new SEC was based on the S-class introduced in the autumn of 1979 (W126).

The most collectible version is the 450 SLC 5.0, the first Mercedes-Benz car with the new light alloy 5.0-litre engine and hood (bonnet) and trunk (boot) lid both made of aluminium, recalling the 1972 'Batmobile' BMW 3.0CSL. The 450SLC 5.0/500SLC coupes were produced by Mercedes-Benz from 1978 to 1981 and are the rarest post-war models ever produced by Mercedes Benz. They were manufactured by Mercedes Benz to homologate the 450SLC for road rally purposes. Some cars were campaigned with factory support, but the rest of the production was sold to the European market to meet homologation guidelines. Fewer than 100 cars were imported into the United States as grey market cars during production. A few more cars were brought into the USA during the 1980’s as a one time “personal” exemption. No one really knows how many of these cars still actually exist, but most estimates are that less than 100 road worthy 450SLC 5.0 and 500SLC’s still exist in the United States at this time.

This rare model was never sold in the US, and it is estimated that less than 200 are still in service worldwide.

It is reported that Mercedes-Benz also began testing a gullwing car that would become 2010 SLC-class model, as a replacement of Mercedes-Benz SLR McLaren.[1]

The car would be built by H.W.A GmbH, Mercedes-Benz's DTM racing partner.[2]