The W124 is a mid-sized luxury vehicle platform. Due to the high cost of German engineer-build-quality, the W124 was designed to last many miles, with awards actually given and worn by high mileage versions (150k, 500k, 1,000,000K). This unique characteristic of ownership explains the surprising number still on the road 14 years after the last one rolled of the assembly lines. Cost cutting became critical in the mid/late 90s as the "no expense spared" over engineered Mercedes-Benz models with a solid construction and the use of quality materials struggled to sell against mass-build Japanese high end cars.

Front suspension was a modified McPherson strut where the coil spring is separated from the strut. The rear suspension of the W124 features the Mercedes multi-link axle introduced in 1982 with the Mercedes 190 and which is now standard on many modern cars. Estate cars (and optionally, saloons and coupes) had Citroen-like self-leveling rear suspension with suspension struts rather than shock absorbers, gas-filled suspension spheres to provide damping and an under bonnet pressurizing pump. Unlike the traditional Citroën application Mercedes opted for a fixed ride height and employed rear coil springs to maintain the static ride height when parked

Much of the 124's engineering and many of its features were advanced automotive technology at its introduction, incorporating innovations that have been adopted throughout the industry. It had one of the lowest coefficient of drag (Cd) of any vehicle of the time (0.28 for the 200/200D model for European market with 185/65 R15 tires) due to its aerodynamic body, that included plastic molding for the undercarriage to streamline airflow beneath the car, reducing fuel consumption and wind noise. It had a single windscreen wiper that had an eccentric mechanism at its base that extended the wiper's reach to the top corners of the windscreen (more than if it had traveled in a simple arc. The saloon/sedan, coupés and convertibles had optional rear headrests that would fold down remotely to improve rearward visibility when required. This feature was not available for the T-model because of its specific layout (no space to store the retractable headrests), but the station-wagon serially came with a "neighbour-friendly" rear door that was pulled in the shut-position silently and automatically by a sensor-controlled servomotor. With the exception of the 200, which was equipped with a Stromberg or Pierburg carburetor but was not available to the United States, fuel injection was standard, and the engines incorporated features[clarification needed] that maximised performance. The most significant feature (over its predecessor the 123 series) was the addition of an oxygen sensor in the exhaust system which, in conjunction with a semi-electronic fuel injection system, could make the engine run more efficiently. Thus producing a better power produced to fuel used ratio and also meeting stricter emission regulations. Mercedes-Benz's four-wheel drive system, the 4Matic was first introduced on the W124 in 1986.

But some main innovations of the W124 series were related to occupant safety. Derived from the Mercedes 190 (W201), with whom the W124 shares the basic layout, its likewise edgy body was designed to withstand an offset-crash in a concrete barrier at some 35 mp/h without serious harm to the occupants and a largely undamaged passenger cabin, a windshield that stays in place and doors easily to open without special recovery tools. This crash-test configuration, outstanding in 1984 and developed by Mercedes-Benz from the early 70ies on with on-the-spot research to meet more adequately the requirements of accidents occurring in real traffic, became the base for the Euro-NCAP procedure currently being the standard crash-test configuration in the EU. Most remarkably: Unlike Euro-NCAP, Mercedes required the body of the W124 to withstand an offest impact from the front and from the rear. The W124 also featured a drivers side airbag (option in Europe, standard in the US), height-adjustable seat belts with electronic-mechanical pre-tensioneers (standard) for both front passengers, rear seat belts which automatically adapted to the seize of the passengers (standard), pedals that were moved inversely in a frontal impact (away from the drivers feet and in the direction of the bulkhead separating the cabin from the engine) and door arm rests with deformable elements designed to reduce abdominal injury risk resulting from a side impact. The dashboard made of impact-absorbing, artificial foam was reinforced with a thin aluminium layer which effectively prevented hoses, valves, housings and other components from heating and engine from penetrating through the dash board inside the passenger cabin in a severe impact. Also, the passenger glove box featured a defined point of rupture, which considerably reduced the probability of front passenger injuries. Apart from the Mercedes 190, the W124 was the first serially manufactured car in history to see widespread use of light-weight high-strength steels, which today are a standard in car design. From late 1988 on, the W124 was one of the first cars available with a passengers side front-airbag as an option worldwide.

The estate cars (model designation S124) came in 5- or 7-seat models, the 7-seater having a rear-facing bench seat that folded flush luggage compartment cover and an optional (in the US until 1994) retractable cargo net. In the US 7-seat models were standard, 5-seat models were not available. The S124 estate continued in production alongside the new W210 until the S210 estate launched more than a year later. A two-door coupe version was also built, with the model designation C124.

Mercedes launched a cabriolet (convertible) version in Europe in 1991, the 320CE, later re-designated as the E320, later followed by the less powerful, but less expensive E220, and the E 200. Mercedes brought the E320 cabriolet (convertible) to the USA from 1993-1995. There were approximately 7 E36 right-hand drive cabriolets built to complement the also rare E36 coupe, saloon and estate. The E320 and E220 cabriolets ceased production in 1997. The cabriolets remain sought-after second hand vehicles, as one of the few full-size sports convertibles available.

Mercedes-Benz offered an option called "Sportline" for the W124 and W201 chassis cars. This option was available in the North American market for the 1992-93 model year 190E 2.6, 1992-93 300E/300CE and 1993-95 E320/E320 Coupe. In the European market, however, the "Sportline" option was available for all body styles. The option package included sport seating (sedans, not coupes), wider wheels (7" rather than 6.5") and lower profile tyres (205/60 x 15 rather than 195/65 x 15), quick ratio steering, "Sportline" badges on the front wing moldings and gear knob, a slightly lowered ride height and a specially tuned suspension including shorter, stiffer springs, struts, anti-roll bars, and bushes

The suspension components of the Sportline package were available as an option on all cars, including estates, as Option 653 - Sports Chassis with 8-Hole light alloy rims

Mercedes also included a sport version of the W124, the 500 E, created in close cooperation and assembled by Porsche. It used the 5.0L 32-valve V8 M119 Engine based upon the 500 SL (R129) roadster, and Porsche engineered the suspension and chassis design with a performance bias. 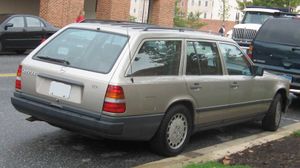 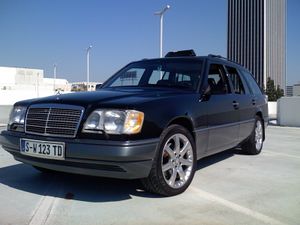 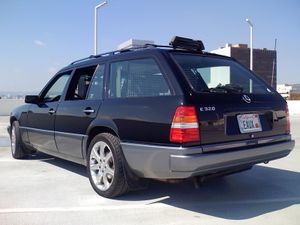 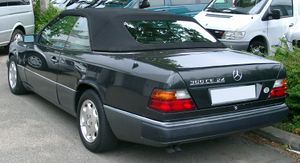 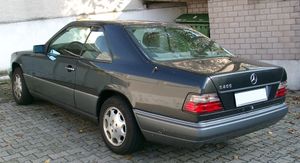