The Mercedes-Benz W154 was a Grand Prix racing car designed by Rudolf Uhlenhaut. The W154 competed in the 1938 and 1939 Grand Prix seasons and was used by Rudolf Caracciola to win the 1938 European Championship.

The W154 was created as a result of a rule change by the sports governing body AIACR, which required supercharged engine capacities to be limited to 3000cc. Mercedes' previous car, the W125 used a 5600cc engine and was therefore ineligible to be entered. Mercedes decided that a new car, designed from the outset to comply with the new regulations would be preferable to modifying the existing car and thus designed the W154.

For the 1938 season, Grand Prix racing's governing body AIACR moved from a formula limited by weight to one limited by engine capacity. This meant Mercedes-Benz's previous car, the W125, was not eligible for entry into 1938 Grands Prix. When designing the new car, Mercedes based the chassis on that used in the W125. The new engine regulations allowed a maximum capacity of 3000cc with a supercharger or 4500cc without. After testing both types, Mercedes chose to use a supercharged 3000cc variant.

To compensate for the smaller engine compared to the W125, the W154 had an extra gear with a 5-speed manual transmission. The first gear was protected by a latch to avoid being engaged accidentally. 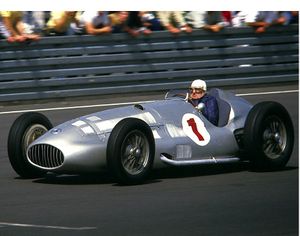 The W154 being demonstrated in 1986 by Hermann Lang

The chassis was largely based on that of the preceding W125.[3] The frame was constructed using oval tubes made of nickel-chrome molybdenum to provide a stiff chassis.

The bodywork of the W125 was aluminium metal, which like its predecessors was left unpainted in its bare silver colour. This brought Mercedes' cars during this period, including the W154, the nickname of Silver Arrows.

The suspension was also near identical to the W125. The rear consisted of De Dion tube, a non-independent suspension designed to keep the two rear wheels in parallel using a solid tubular beam. The rear also had hydraulic rear dampers, which were possible to adjust from within the cockpit during a race.