Throughout its long history, Mercedes-Benz has been involved in a range of motorsport activities, including sportscar racing and rallying, and is currently active in Formula Three, DTM and Formula One. 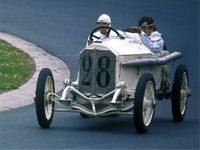 The two companies which were merged to form the Mercedes-Benz brand in 1926 had both already enjoyed success in the new sport of motor racing throughout their separate histories. In fact both were entered into the very first automobile race Paris to Rouen 1894. The Mercedes Simplex of 1902, built by DMG, was Mercedes' first purpose built race car — much lower than their usual designs — which were similar to horse carriages; that model dominated racing for years. In 1914, just before the beginning of the First World War, the DMG Mercedes 35 hp won the French Grand Prix, finishing 1-2-3.[1]

Karl Benz's company, Benz & Cie. built the "bird beaked", Blitzen Benz that set land speed records several times, reaching 228.1 km/h (141.7 mph) in 1911.[2] That record gained that model the reputation of being faster than any other automobile — as well as any train or plane.[2] They constructed many aerodynamically designed race cars. 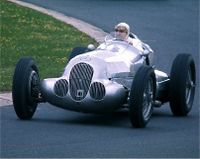 Benz was involved in Grand Prix motor racing from 1923, when the Benz Tropfenwagen (described as having a teardrop shape) was introduced to motorsport at the European Grand Prix at Monza.

In the 1930s, the new joint company, Daimler-Benz, with their mighty Mercedes-Benz Silver Arrows, dominated Grand Prix racing in Europe together with its rival, Auto Union. In fact the colour of the cars, which was later to become legendary, was unintentional - they had initially been painted white as was traditional for German cars, but the paint was stripped away to reduce weight. The cars set speed records up to 435 km/h (270 mph). The team was guided by the great Rennleiter (racing team manager) Alfred Neubauer until the company ceased racing at the start of WWII.

Karl Kling at the wheel of the W196 at Nürburgring

In 1954 Mercedes-Benz returned to what was now known as Formula One racing (a World championship having been established in 1950), using the technologically advanced Mercedes-Benz W196 which was run in both open-wheeled and streamlined forms. Juan Manuel Fangio, a previous champion (1951) transferred mid-season from Maserati to Mercedes-Benz for their debut at the French Grand Prix on 4 July 1954. The team had immediate success and recorded a 1-2 victory with Fangio and Karl Kling, as well as the fastest lap (Hans Herrmann). Fangio went on to win three more races in 1954, winning the Championship.

The success continued into the 1955 season, where the same car was used again. The team's drivers, Fangio and the young Stirling Moss, won 6 of the 9 rounds between them, and finished first and second in that year's championship.

In 1993, Mercedes-Benz made its return to Formula One as an engine supplier to Sauber, with whom they had already enjoyed success in sportscar racing, in its debut F1 season, with a V10 engine manufactured by Ilmor[3]. The Sauber C12 made a good debut at the 1993 South African Grand Prix, with drivers JJ Lehto and Karl Wendlinger qualifying within the top ten and the team left South Africa with two points thanks to Lehto. Mercedes supplied Sauber for 2 years, scoring twenty–four points during their partnership.

The 2007 McLaren-Mercedes MP4-22 Formula One car being driven by Lewis Hamilton.

1995 saw the normally aspirated Mercedes-Benz-Ilmor F1-V10 moved to the Woking based McLaren team, replacing Peugeot who moved to supplying their engines to the Jordan team. In a season dominated by the Renault powered Benetton B195s and Williams FW17s, the McLaren-Mercedes partnership produce thirty points with 2 podium finishes from Mika Häkkinen. 1996 produced similar results to '95 with the team finishing behind the trio of Williams, Benetton and Ferrari, but the team still scored three times as many podium positions in comparison to the previous year. Outside Formula One, Mercedes-Benz had increased its shareholding in the Ilmor company in 1996 and took full control nine years later. They have continued to design and build engines for McLaren. 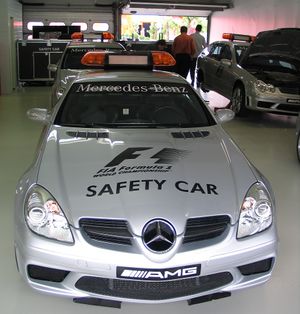 Since 1996, Mercedes-Benz have supplied their cars for use as safety cars in Formula One safety.

In the opening race of the 1997 Formula One season, David Coulthard produced victory for McLaren and ushered in a new era of success for the British based squad. Coincidentally this was the first race in which McLaren had competed with a silver livery due to West replacing Marlboro, who moved to Ferrari, as title sponsor. The colour drew inevitable comparisons to the Silver Arrows of a previous era, and the nickname was applied to the McLarens. This was a significant result in F1 racing, McLaren's first victory for three seasons and the first win for Mercedes-Benz since Juan Manuel Fangio's success at the 1955 Italian Grand Prix. McLaren and Mercedes-Benz still, however, finished fourth in the Contructors' Championship behind the same three teams as the previous two season, but they had collected more than twice as many points in '97 as they had in '95. 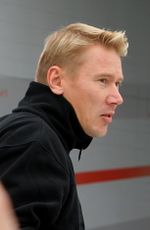 Mika Häkkinen won the Drivers' Championship with a Mercedes powered McLaren in 1998 and 1999.

With an Adrian Newey designed MP4/13 for 1998, McLaren went onto win both the Drivers' Championship with Häkkinen and the Contructors' title, their first in seven years, by twenty–three points to their nearest rivals Ferrari. Häkkinen went onto win the title for the second time in succession the following season, however, the team failed to retain their Contructors' title, losing it to Ferrari by four points.

2000 and 2001 saw McLaren and their drivers play second fiddle to the dominant partnership of Michael Schumacher and Ferrari, as the Italian-German partnership won nineteen of a possible thirty–four races. Häkkinen retired from Formula One before the 2002 season, although he would later represent Mercedes in the Deutsche Tourenwagen Masters series. Fellow Finn Kimi Räikkönen replaced him. Mclaren dropped down the in order in terms of Constructors' Championship position, losing its second place position to the BMW-Williams team, with the season still being dominated overall by Schumacher and Ferrari. For the following four years McLaren proved to be one of the fastest cars in the field but lacked in reliability, most notably in 2005 and 2006; the 2006 season marked the first since 1996 in which McLaren had failed to win a race.

In 2003, this partnership was extended into the production of a Mercedes-McLaren roadcar, the SLR. Mercedes also supplies the cars to the FIA for use as safety cars and other race official roles, such as the medical car, at Formula One races. 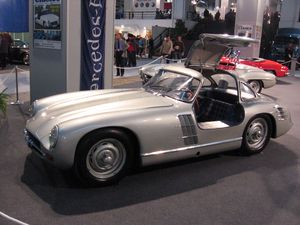 Mercedes-Benz 300SL Transaxle, the 1953 prototype used in the return to motorsports

It was in 1952 that Mercedes-Benz returned to racing after the war, again with Alfred Neubauer as team manager. Their small and underpowered gull-winged Mercedes-Benz 300SL, won several races in 1952 including the 24 hours of Le Mans, the Carrera Panamericana, and did well in other important races such as the Mille Miglia.

Mercedes-Benz was also dominant in sports car racing during the 1950s. The Mercedes-Benz 300 SLR was derived from the W196 Formula One car for use in the 1955 World Sportscar Championship season. At Le Mans that year, a disaster occurred in which a Mercedes-Benz 300SLR collided with another car, killing more than eighty spectators. The team went on to win the two remaining races of the season, and won the Manufacturer's championship, but it had already been planned at the beginning of that year that the company would retire its teams at the end of the 1955 season.[4] In fact in the aftermath of the Le Mans disaster, it would be several decades until Mercedes-Benz returned to front line motorsport.

In the late 1960s and early 1970s, Mercedes returned to competition through the tuning company AMG (later to become a Mercedes-Benz subsidiary), which entered the big Mercedes-Benz 300SEL 6.3 V8 sedan in the Spa 24 Hours and the European Touring Car Championship. 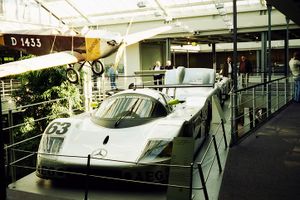 In 1985 Mercedes-Benz returned to sports car racing, as an engine supplier for the Group C cars of the Sauber team. The first cars produced by this relationship, the Sauber C8 and C9 were not particularly successful until the C9 recorded a victory at the 1989 Le Mans race. After this watershed, Mercedes increased its involvement further, and the next sportscar produced by the partnership was called the Mercedes-Benz C11, although the chassis was still built by Sauber. Mercedes-Benz enjoyed some success, but eventually withdraw from sportscar racing after a dismal 1991 season.

Mercedes-Benz returned to sportscar racing in 1997, with the CLK GTR which was entered in the new FIA GT Championship world championship series. The successor to this car, the CLR was a spectacular failure. It was entered in the 1999 Le Mans race, but a series of accidents involving the car flipping brought about the cancellation of the CLR project.

It was intended that Mercedes-Benz would enter rallying with the Mercedes-Benz W201 in the early 1980s. Yet, as all wheel drive and turbochargers were introduced by the competition (Audi Quattro) at that time, this was cancelled. Instead the W201 ended up being used in the DTM touring car series from 1988, with the car again being prepared by AMG, who became an official partner and continue to enter the new DTM to the present day. Mercedes currently competes in the new DTM championship.

In the five years since Mercedes-Benz began its involvement in Formula Three, it has developed into the formula's most dominant engine supplier. Its engines, which are built and serviced by H.W.A GmbH, have so far contributed to a total of four drivers' and four teams' championship titles in the Formula Three Euroseries and British Formula Three Championship.

The H.W.A Mercedes-AMG M271 was based on a 1.8 litre 4-cylinder from the C-Klasse, bored out to the regulation 2.0 litre capacity.[5] Formula Three engine regulations demand a naturally-aspirated, 4-stroke, 4-cylinder, production-based specification, with a capacity of not more than 2000cc.[6] The M271 made its competitive debut in the 2002 German Formula 3 Championship in two of Mücke Motorsport's three Dallara F302 chassis, driven by Markus Winkelhock and Marcel Lasse.[7] Winkelhock achieved Mercedes' first F3 win at the Nürburgring in August 2002.[8]

In 2003, Mercedes expanded its Formula Three program by supplying three teams in the inaugural year of the F3 Euroseries. Its engine powered the seven cars of Mücke Motorsport, Team Kolles, and ASM Formule 3.[9] Speiss-Opel was dominant, thanks in part to Ryan Briscoe and Prema Powerteam, but Mercedes was winning by the eighth round.[10] Its most notable win was provided by Christian Klien at Zandvoort in the non-championship Marlboro Masters.[11]

Between 2004 and 2006, Mercedes-powered cars have dominated the drivers' and teams' championships in the Euroseries, due in part to its close relationship with ASM Formule 3, which is one of France's most successful F3 teams. It has brought drivers' titles for Jamie Green, Lewis Hamilton, and Paul di Resta.[12] 2006 also saw Mercedes' first participation in the British F3 Championship, when it partnered with Double R Racing, co-owned by Kimi Räikkönen, and two other teams.[13] Double R Racing's lead driver, Mike Conway, dominated the championship.[14] In the 2007 British F3 season, Mercedes now powers the majority of the Championship field.

Penske-Mercedes IndyCar in the Mercedes-Benz Museum.

In 1994, Al Unser Jr. won the Indianapolis 500 with a Penske-Mercedes IndyCar. Mercedes-Benz which, realizing that a loophole in the rules for production-based engines would include any pushrod engine, built a very unusual purpose-built pushrod engine with a significant power advantage. This was done knowing that the "forgotten" loophole would be closed immediately after they took advantage of it, and so the engine would in fact be usable only for this single race.

Starting from 1995, Mercedes-Benz rebranded the Ilmor engines and achieved six wins in their first full season, also reaching second in the drivers championship powering Al Unser Jr.. After a dry spell in 1996, Mercedes-Benz came back in 1997 with eight wins and a second place in the championship for Gil de Ferran. However, a lack of competitive results in the following results and the CART/IRL split meant Mercedes gradually lost interest and the German manufacturer abandoned American racing at the end of the 2000 season, with a total of 18 wins and two vice-championships.