Gottlieb Wilhelm Daimler (March 17, 1834 - March 6, 1900) was an engineer, industrial designer and industrialist, born in Schorndorf (Kingdom of Württemberg), in what is now Germany. He was a pioneer of internal-combustion engines and automobile development.

Daimler and his lifelong business partner Wilhelm Maybach were two inventors whose dream was to create small, high speed engines to be mounted in any kind of locomotion device. They designed in 1885 a precursor of the modern petrol engine which they subsequently fitted to a two-wheeler, considered the first motorcycle and, in the next year, to a stagecoach, and a boat. They are renowned as the designers of this Grandfather Clock engine.

Later, in 1890, they founded Daimler Motoren Gesellschaft (DMG). They sold their first automobile in 1892. Daimler fell ill taking a break from the company and upon his return experienced difficulty with the other stock holders that led to his resignation in 1893 that was reversed in 1894. Soon Maybach resigned also and he returned at the same time as Daimler. In 1900 Daimler died and Maybach quit DMG in 1907. In 1924, the DMG management signed a long term co-operation agreement with Karl Benz's Benz & Cie., and in 1926 the two companies merged to become Daimler-Benz AG, which is now part of Daimler AG.

Gottlieb Wilhelm Daimler was the son of a baker named Johannes Däumler (Daimler) and his wife Frederika, from the town of Schorndorf near Stuttgart, Württemberg. By the age of thirteen (1847), he had completed his six years of primary studies in Lateinschule where he had also had additional drawing lessons on Sundays and expressed an interest in engineering. The next year, he started studying gunsmithing; building with his teacher, Riedel, a double-barreled gun.

Again, Daimler became restless in his studies as his main interest still lay in engineering. In 1852 when eighteen, he finally decided to take up mechanical engineering, and left his hometown. He worked at several firms, not least Armstrong-Whitworth,[1] before ending up at Deutz.

In 1872 (at age thirty-eight), Gottlieb Daimler and Wilheim Maybach moved to work at the world's largest manufacturer of stationary engines of the time, the Deutz-AG-Gasmotorenfabrik in Cologne. It was half-owned by Nikolaus August Otto who was looking for a new technical director. As directors, both Daimler and Otto focused on gas-engine development while Maybach was chief designer.

In 1876, Otto invented the Four-stroke cycle also known as the Otto Cycle a system characterized by four piston strokes (intake, compression, power, and exhaust). Otto intended that his invention would replace the steam engines predominant in those years, even though his engine was still primitive and inefficient. Otto's engine was patented in 1877, but the patent was soon challenged and overturned. Unknown to Otto, Daimler, and Maybach, in Mannheim during 1878 Karl Benz was concentrating all his efforts on creating a reliable two-stroke gas engine based on the same principle. Benz finished his engine on December 31, 1878, New Year's Eve, and was granted a patent for his engine in 1879.

Meanwhile, serious personal differences arose between Daimler and Otto, reportedly with Otto being jealous of Daimler, because of his university background and knowledge. Daimler was fired in 1880, receiving 112 Gold-marks in Deutz-AG shares in compensation for the patents of both Daimler and Maybach. Maybach resigned later. 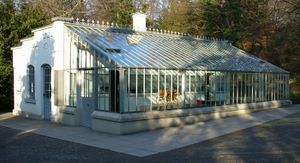 After leaving Deutz-AG, Daimler and Maybach started to work together. In 1882, they moved back to Stuttgart in Southern Germany, purchasing a cottage in Cannstatt's Taubenheimstrasse, with 75,000 Gold marks from the compensation from Deutz-AG. In the garden, they added a brick extension to the roomy glass-fronted summerhouse and this became their workshop. Eventually, their activities alarmed the neighbors who called the police and reported them as suspected counterfeiters. The police obtained a key from their gardener and raided the house in their absence, but found only engines.

Daimler and Maybach spent long hours debating how best to fuel Otto's Four-Stroke design, and turned to a byproduct of petroleum. The main distillates of petroleum at the time were lubricating oil, kerosene (burned as lamp fuel), and benzine, which up to then was used mainly as a cleaner and was sold in pharmacies.

In late 1885, Daimler and Maybach developed the first of their petrol engines, which featured:

In 1885, they created a carburetor which mixed gasoline with air allowing its use as fuel. In the same year Daimler and Maybach assembled a larger version of their engine, still relatively compact, but now with a vertical cylinder of 100 cm² displacement and an output of 1 hp at 600 rpm (patent DRP-28-022: "non-cooled, heat insulated engine with unregulated hot-tube ignition"). It was baptized the Standuhr (Grandfather Clock), because Daimler thought it resembled an old pendulum clock. This is probably the same internal-combustion engine referred to by American author and historian Henry Adams, who, in his autobiography, describes the "Daimler motor"[4] at the Paris Exposition of 1910[5] 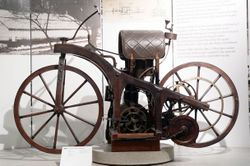 In November 1885, Daimler installed a smaller version of this engine in a wooden bicycle, creating the first motorcycle (Patent 36-423impff & Sohn "Vehicle with gas or petroleum drive machine"). It was named the "riding car" (Reitwagen). Maybach rode it for three kilometers (two miles) alongside the river Neckar, from Cannstatt to Untertürkheim, reaching 12 km/h (7 mph).

Also in 1885, but unknown to Maybach and Daimler, only sixty miles away in Mannheim, Karl Benz built the first true automobile using an integral design for a motorized vehicle with one of his own engines and he was granted a patent for his motorwagen dated January 29, 1886.

On March 8, 1886, Daimler and Maybach secretly brought a stagecoach made by Wilhelm Wafter into the house, telling the neighbors it was a birthday gift for Mrs. Daimler. Maybach supervised the installation of a larger 1.1 hp [3] 462cc (28in3)[3] (70×120 mm, 2.76×4.72 in)[3] version of the Grandfather Clock engine into this stagecoach and it became the first four-wheeled vehicle to reach 16 km/h (10 mph). The engine power was transmitted by a set of belts. As with the motorcycle, it also was tested on the road to Untertürkheim where nowadays the Gottlieb-Daimler-Stadion is situated.

Driven by Daimler's desire to use the engine as many ways as possible,[3] Daimler and Maybach also used their engine in other types of transport including:

They sold their first foreign licenses for engines in 1887 and Maybach went as company representative to the Paris World's Fair to show their achievements.

Engine sales increased, mostly for boat use, and in June 1887, Daimler bought another property at Seelberg hill, Cannstatt. It was located some distance from the town on Ludwigstraße 67 because Cannstatt's mayor did not approve of the workshop which cost 30,200 gold marks. The new premises had room for twenty-three employees and Daimler managed the commercial issues while Maybach ran the engine design department.

In 1889, Daimler and Maybach built their first automobile that did not involve adapting a horse-drawn carriage with their engine, but which was somewhat influenced by bicycle designs. There was no production in Germany, but it was licensed to be built in France and presented to the public in Paris in October 1889 by both engineers. The same year, Daimler's wife, Emma Kunz, died.

In 1890 Daimler Motoren Gesellschaft (Daimler Engines Company) or DMG, was founded with Maybach as chief designer. Its purpose was the construction of small, high-speed engines for use on land, water, and air transport. The three uses were expressed by Daimler in a sketch and it became the basis for a logo of with a three-pointed star.

Daimler and Maybach were struggling financially with the company, they were not selling enough engines or making enough money from their patents. Two financiers and munitions makers, Max Von Duttenhofer and William Lorenz, along with the influential banker Kilian von Steiner agreed to inject some capital and converted the company on November 28, 1890 into a public corporation named the Daimler Motoren Gesellschaft, DMG.

Many German historians consider this Daimler's "pact with the devil".[6] DMG expanded, but it changed. The newcomers, not believing in automobile production, ordered the creation of additional stationary building capacity, and also considered merging DMG with Otto's Deutz-AG.

Daimler and Maybach preferred plans to produce automobiles and reacted against Duttenhofer and Lorenz. Maybach was denied a seat on the Board and on February 11, 1891, left the company. He continued his design work as a freelance in Cannstatt from his own house, with Daimler's support, moving to the closed Hermann Hotel in the autumn of 1892 using its ballroom and winter garden, employing twelve workers and five apprentices.

Finally, in 1892, DMG sold its first automobile. Gottlieb Daimler, at age fifty-eight, had heart problems and suffered a collapse in the winter of 1892 and 1893. His doctor prescribed a trip to Florence, Italy where he met Lina Hartmann, a widow twenty-two years his junior, who was the owner of the hotel where he was staying. They married on July 8, 1893, honeymooning in Chicago during its World Fair.

The disputes with Lorenz continued. Daimler attempted to buy 102 extra shares to get a majority holding, but was forced out of his post as technical director. The company also was in debt to the amount of 400,000 gold marks and the other directors threatened to declare bankruptcy if Daimler didn't sell them all his shares and all his personal patent rights from the previous thirty years. Daimler accepted the option, receiving 66,666 gold marks, resigning in 1893.

In 1894 at the Hermann Hotel, Maybach together with Daimler and his son Paul designed a third engine called the Phoenix and had DMG make it. It featured:

It became famous around the world and when fitted to a car it won the petrol engine category of the first car race in history, the Paris to Rouen 1894.

The ill-defined relationship between the inventors and DMG harmed the image of DMG's technical department. This continued until during 1894 when the British industrialist Frederick Simms made it a condition of his 350,000 mark purchase of a Phoenix engine license, which would stabilize the company finances, that Daimler, now aged sixty, should return to DMG. Gottlieb Daimler received 200,000 gold marks in shares, plus a 100,000 bonus. Simms received the right to use the name Daimler as his brand name for the engines. In 1895, the year DMG assembled its 1000th engine, Maybach also returned as chief engineer, receiving 30,000 in shares.

During this period, their agreed to licenses to build Daimler engines around the world, which included:

In a letter to his wife in the 1870s there was historically significant remark. On a panoramic postcard of Cologne, Gottieb Daimler traced a three pointed star, writing: "one day this star will shine over our triumphant factories". The motto inspired Daimler and Maybach to use petrol engines in three ways, on land, water and air. After more than two decades, under Paul and Adolf Daimler's initiative, Daimler's star became the trademark of DMG-Mercedes engine of 1902 that was built by Maybach two years after Daimler's death. Gottlieb Daimler was accepted into the Automotive Hall of Fame in 1978. Between 1993 and July 2008 Daimler had a stadium named after him in Stuttgart, Germany. The Gottlieb-Daimler-Stadion was the venue for six matches in the 2006 FIFA World Cup. It is now called Mercedes-Benz Arena.

Gottlieb Daimler's motto was: “Nothing but the best.”