From Mercedes Wiki
Jump to navigation Jump to search
For other uses of the name Mercedes, see Mercedes.

Mercedes-Benz is a German manufacturer of automobiles, buses, coaches, and trucks. It is currently a division of the parent company, Daimler AG (formerly DaimlerChrysler AG), after previously being owned by Daimler-Benz. Mercedes-Benz has its origins in Karl Benz's creation of the first automobile in January 1886,[1] and by Gottlieb Daimler and engineer Wilhelm Maybach's conversion of a carriage by the addition of a petrol engine the same year. The Mercedes automobile was first marketed in 1901. The first Mercedes-Benz brand name vehicles were produced in 1926, following the merger of Karl Benz's and Gottlieb Daimler's companies into the Daimler-Benz company.[1] Mercedes-Benz has introduced many technological and safety innovations that have become common in other vehicles several years later.

Since its inception, Mercedes-Benz had a reputation for quality and durability. Objective measures looking at passenger vehicles such as J.D. Power surveys demonstrated a downturn in reputation in this area in the late 1990s and early 2000s. By mid-2005, Mercedes temporarily returned to the industry average for initial quality, a measure of problems after the first 90 days of ownership, according to J.D. Power.[2] In J.D. Power's Initial Quality Study for the first quarter of 2007, Mercedes showed dramatic improvement by climbing from 25th to 5th place, surpassing quality leader Toyota and earning several awards for its models. [3] For 2008, Mercedes-Benz's initial quality rating improved by yet another mark, now in fourth place.[4] On top of this accolade, it also received the Platinum Plant Quality Award for its Mercedes’ Sindelfingen, Germany assembly plant.[4] As of 2009, Consumer Reports of the United States has changed their reliability ratings for several Mercedes-Benz vehicles to "average," and recommending the E-Class and the S-Class.[5]

The two companies which were merged to form the Mercedes-Benz brand in 1926 had both already enjoyed success in the new sport of motor racing throughout their separate histories- both had entries in the very first automobile race Paris to Rouen 1894. This has continued, and throughout its long history, the company has been involved in a range of motorsport activities, including sports car racing and rallying. On several occasions Mercedes-Benz has withdrawn completely from motorsport for a significant period, notably in the late 1930s and after the 1955 Le Mans disaster, where a Mercedes-Benz 300SLR collided with another car and killed more than eighty spectators. Although there was some activity in the intervening years, it was not until 1987 that Mercedes-Benz returned to front line competition, returning to Le Mans, DTM, and F-1 sports car racing with Sauber.

The 1990s saw Mercedes-Benz purchase engine builder Ilmor (now Mercedes-Benz High Performance Engines), and campaign cars at the famed Indy 500 race under the USAC/CART rules, eventually winning that race with Al Unser, Jr. at the wheel. The 90's also saw the return of Mercedes-Benz to GT racing, and the Mercedes-Benz CLK GTR, both of which took the company to new heights by dominating the FIA's GT1 class.

Mercedes-Benz is currently active in three forms of motorsport, Formula Three, DTM and Formula One. In Formula One, the company part owns Team McLaren and has supplied the team with engines engineered by Ilmor[6] since 1995. This partnership has brought success, including Drivers Championships for Mika Häkkinen in 1998 and 1999 and for Lewis Hamilton in 2008, as well as a Constructors Championship in 1998. The collaboration with McLaren has been extended into the production of roadgoing cars such as the Mercedes-Benz SLR McLaren.

In 1958 Mercedes-Benz entered into a distribution agreement with the Studebaker-Packard Corporation of South Bend, Indiana (USA), makers of Studebaker and Packard brand automobiles. Under the deal, Studebaker would allow Mercedes-Benz access to their U.S. dealer network, handle shipments of vehicles to those dealers, and in return receive compensation for each car sold. Studebaker also was permitted to use the German automaker’s name in its advertisements, which stressed Studebaker's quality over quantity.

Besides its native Germany, Mercedes-Benz vehicles are also manufactured or assembled in:

Mercedes-Benz has a full range of passenger, light commercial and heavy commercial equipment. Production is on a global basis. The Smart brand of city cars has also been part of the Mercedes-Benz Group since 1994.

The following passenger vehicles were in production in 2009: 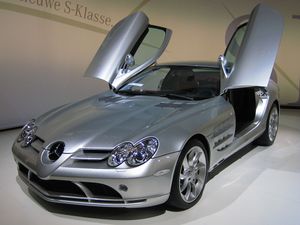 A silver SLR McLaren on display at the 2006 European Motor Show in Brussels.

Mercedes-Benz has also produced a sports car with McLaren Cars, an extension of the collaboration by which Mercedes engines are used by the Team McLaren-Mercedes Formula One racing team, which is part owned by Mercedes. The 2003 Mercedes-Benz SLR McLaren has a carbon fiber/fibre body with a 5.4l V8 supercharged engine. This is the same block as featured in SL55 AMG and the CLS55 AMG, though modified to give 460 kW (630 PS; 620 hp) and 780 N·m (575 ft·lb) of torque. The SLR has a maximum speed of 337 kilometres per hour (209 mph) and costs approximately US$500,000. Due to European pedestrian-protection regulations, McLaren has decided to cease production of the SLR in 2009.[20]

The most recent new joint-venture model, expected to reach production, is the mid-engine P8 sports car. Based around a unique carbon fiber/fibre monocoque, manufactured by McLaren, the P8 was originally predicted to receive the new naturally aspirated 6.2L V8 from Mercedes-AMG, but insiders now say that the engine will be modified for the car and will probably be twin- turbocharged to produce in excess of 600 bhp (450 kW). The car is still in development, but likely to reach production to go on sale in early 2008, and have a price tag less than that of the SLR.

In 1994 (starting with the 1994 models), the traditional nomenclature of Mercedes-Benz vehicles changed. Since the early days of the company the name would be in the form of 500E where the engine displacement made up the first three numbers and the last letter(s) represented the type of engine and/or chassis; for example: "E" for fuel injection ("Einspritzung" in German), "D" for Diesel, "L" for long wheelbase etc.

In 1994, this was altered so that the prefix reflected the model ("class", German "Klasse", in Mercedes-Benz terminology) and a number the displacement. The suffix was retained in some cases, for example "L" for long wheelbase, and "CDI" for Diesel (CDI = Common rail Direct Injection). Thus, the 500E in the example above became the E500 ("E-Klasse", 5 liters displacement). It should also be noted that while in the past the model number generally accurately reflected the actual engine displacement, this is currently not always the case - for example the E200 CDI and E220 CDI actually both have a 2.2 liter/litre displacement, and the C240 actually has a 2.6 liter/litre engine.

At the 2007 Frankfurt motor show, Mercedes-Benz showed seven hybrid models, including the F700 concept car which combined hybrid drive with the innovative DiesOtto engine.[22][23] In 2009, the S400 hybrid sedan is scheduled to go on sale.[24]

On the other hand, Mercedes-Benz says it will have a demonstration fleet of practical, if small, electric vehicles on the road in two to three years, from 2008. [25]

Mercedes-Benz S 400 BlueHYBRID,[21] will be launched in calendar 2009 and will be the first production automotive hybrid in the world to use a lithium ion battery.[26] [27] 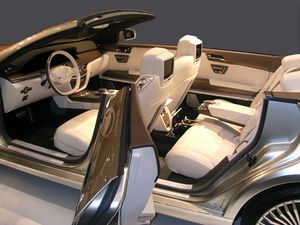 Interior of the Ocean Drive Concept.

The first factory to be built outside Germany after WWII was in Argentina. It originally built trucks, many of which where modified independently to buses, popularly named Colectivo. Today it builds buses, trucks and the Sprinter Van. 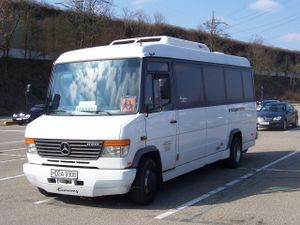 Mercedes-Benz produces a range of vans. The current (January 2009) range consists of:

Mercedes-Benz is one of the world's largest manufacturer of trucks.

The current (January 2009) range consists of:

Several companies have become car tuners (or modifiers) of Mercedes Benz, in order to increase performance and/or luxury to a given model.

AMG is Mercedes-Benz's in house performance-tuning division, specializing in high-performance versions of most Mercedes-Benz cars. AMG engines are all hand-built [31] and each completed engine receives a tag with the signature of the engineer who built it. AMG has been fully-owned by Mercedes-Benz since 1999.[32]

There are numerous independent tuners:

The "Safety cage" or "Safety cell" construction with front and rear crumple zones was first developed by Mercedes-Benz in 1951. This is considered by many as the most important innovation in automobile construction from a safety standpoint [33]

Anti-lock brakes (ABS), traction control and airbags in the European market, were Mercedes-Benz innovations. These technologies were introduced in 1978, 1986 and 1980 respectively.

Mercedes-Benz was the first to introduce pre-tensioners to seat belts on the 1981 S-Class. In the event of a crash, a pre-tensioner will tighten the belt instantaneously, preventing the passenger from jerking forward in a crash.

In 1959, Mercedes-Benz patented a device that prevents drive wheels from spinning by intervening at the engine, transmission, or brakes. In 1987, Mercedes-Benz applied its patent by introducing a Traction control system that worked under both braking and acceleration.

Stability control, brake assist (Press Release) , and many other types of safety equipment were all developed, tested, and implemented into passenger cars—first—by Mercedes-Benz. Mercedes-Benz has not made a large fuss about its innovations and has even licensed them for use by competitors—in the name of improving automobile and passenger safety - In fact, crumple zones and anti-lock brakes are now used on all modern luxury vehicles. [33] 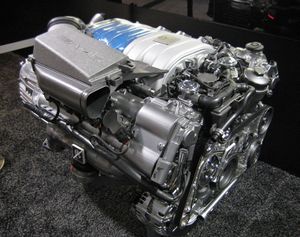 The most powerful naturally aspirated eight cylinder engine in the world is the Mercedes-AMG, 6208 cc M156 V8 engine. The V8 engine is badged '63 AMG' and replaced the '55 AMG' M113 engine in most models. The M156 engine produces up to 525 bhp (391 kW), and although some models using this engine do have this output (such as the S63 and CL63 AMGs) specific output varies slightly across other models in the range.[34]

Mercedes-Benz pioneered a system called Pre-Safe to detect an imminent crash and prepares the car's safety systems to respond optimally. It also calculates the optimal braking force required to avoid an accident in emergency situations and makes it immediately available for when the driver depresses the brake pedal. Occupants are also prepared by tightening the seat belt, closing the sunroof and windows, and moving the seats into the optimal position.

Mercedes Benz is developing a fatigue-detection system that warns the driver when they are displaying signs of micro-sleep (when the eyes stay closed for slightly longer than a natural blinking action). The system will use a variety of data including the individual driving style, the duration of the journey, the time of day and the current traffic situation. Fatigue mostly sets in gradually.[36]

Half a century of vehicle safety innovation helped win Mercedes- Benz the Safety Award at the 2007 What Car? Awards [37]

In the 1980s Mercedes built the world's first robot car, together with the team of Professor Ernst Dickmanns at Bundeswehr Universität München. Partially encouraged by Dickmanns' success, in 1987 the European Union's EUREKA programme initiated the Prometheus Project on autonomous vehicles, funded to the tune of nearly 800 million Euros. A culmination point was achieved in 1995, when Dickmanns´ re-engineered autonomous S-Class Mercedes took a long trip from Munich in Bavaria to Copenhagen in Denmark and back. On highways the robot achieved speeds exceeding 175 kilometres per hour (roughly 110 miles per hour; permissible in some areas of the German Autobahn). The car's abilities has heavily influenced robot car research and funding decisions worldwide.