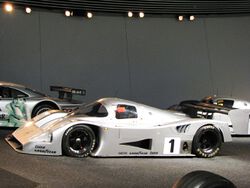 The Mercedes-Benz C11 was a Group C prototype race car introduced in 1990 for the World Sportscar Championship. Built by Sauber as a successor to the Sauber C9, the C11 used the same Mercedes-Benz M119 5.0L Turbocharged V8 from the C9. It was the first time that Mercedes-Benz chose to put their name on the car, instead of simply using Sauber.

Debuting at the first race of the 1990 World Sportscar Championship season, the car did not actually race, choosing instead to run only in practice while the team used the reliable C9 from the previous year. However, for the 2nd race the C11 did race, and was able to successfully come home with first and second. Throughout the rest of the season, the C11 won all but one race and easily took the team's championship for the year.

Although Sauber-Mercedes had been successful in winning the 1989 24 Hours of Le Mans, the team choose not to defend the title in 1990 due to the race not being part of the World Sportscar Championship schedule. The team chose instead to concentrate on winning the championship.

Although the C11 was to be replaced by the Mercedes-Benz C291 for the 1991 World Sportscar Championship season, problems with the C291's new engine led Mercedes-Benz to continue to campaign the C11 alongside the C291. The C11 was able to gain three more class wins in the 1991 season before the C291 fully replaced it.

It should be noted that the reason that Sauber skipped from C9 to C11 is due to the difficult pronunciation of C10 in German, with C and 10 being pronounced nearly identically.